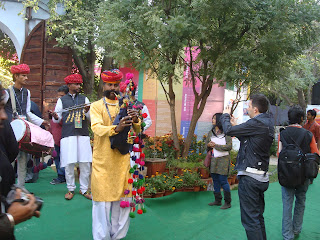 The Jaipur Literature Festival (JLF) kicked off today with Sanjoy Roy, producer of the event, taking the mike on the front lawns to welcome everyone. But before he could go beyond the first word, a jingle played on thevideo screen.

“We are the blackberry boys” from Vodafone played while everyone including Sanjoy Roy waited for it to finish. This was a first at the festival. A commercial break before a session. Fortunately, it did not repeat through the rest of the sessions.
Welcoming everyone from all the continents of the world, Roy threw open the festival platform for a five day feast of debate and dialogue.
The tall brass lamps were lit by Indian Council for Cultural Relations (ICCR) President Karan Singh andRajasthan Chief Minister Ashok Gehlot in the presence of the festival founders and directors.
Faith Singh spoke about the traditions and languages of India that are in danger of slowly disappearing, some may say rapidly. At the start of her short address she mentioned that she has lived in Jaipur for several years, is married and living here and for good measure added in Hindi, “meiin is jagah se hoon”. So don’t go on about my being a gori. Don’t go on about my colour, she said.
Was this a response to the piece on JLF by Hartosh Singh Bal of Open magazine? It definitely appeared so.
William Dalrymple spoke next saying that the festival has grown considerably over the years. He went over the history of the festival right from its inception till its present day. The number of authors has grown to 222 and this year and the grounds have been further expanded to accommodate more sessions and bigger crowds.
Namita Gokhale said the festival was among other things the creation of a democratic intellectual arena for simultaneous and conflicting worlds to interact . So every year in January the world visits Jaipur and Jaipur visits the world.
Dr Karan Singh spoke next, quoting frequently from the Ram Charitmanas. He said, “India is the only country in the world to have creative literature in 25 languages.” He suggested that all the languages should be included in the festival and stressed the importance of translations and poetry in the literary arena.
Sheldon Pollock, the Sanskrit scholar and professor at the University of Columbia started his keynote address by saying, “A poet writes poems but it is the scholar who understands them.”

Sheldon Pollock delivering the keynote address at the Jaipur Literature Festival on January 21, 2011.
Recalling previous keynote speakers of the last two years, Girish Karnad and U R Ananthamurthy, Pollock said that literary festivals were happening in India as early as the end of the 12th century when a multiplicity of literary creative activities took place in Northern Karnataka in the region of Kalyana. There was a need to preserve old classical and all Indian languages including Kannada, Assamese, Gujarathi, Marathi.
When there are problems that need to be tackled seriously, India had managed to tackle them effectively. There was a need for an Indian Institute of Classical Studies to be established on similar lines as the Indian Institutes of Technology (IITs), Indian Institutes of Management ( IIMs) and the Indian Institute of Science (IISc).
The session with Orhan Pamuk in conversation with Chandrahas Choudhary was interesting from the start. He spoke about his earliest ambition to be a painter and then becoming a writer.
He felt the immediate joys of seeing the world through not only words but also colours that were akin to the joys of looking at 16th century Islamic miniature paintings. The past is not only to be preserved in a museum but to be reinvented to help us in understanding our culture. It was important to rewrite the past in such a way that it lives in history and in the imagination of the people.
He read a passage from his book My name is Red which had been kept open and face down on the table. When Chandrahas Choudhary picked up the book to glance through it, Pamuk snatched it back and placed it on the table evoking laughter from the audience. When the session was thrown open toquestions, Pamuk requested that questions be short.
One man in the audience asked the author which love was deeper, the spiritual one or the sexual one. Pamuk was quick to reply that the one that penetrated more was the deeper love, adding that he used the word penetration since the question mentioned depth of love!
The session titled Emperor of Maladies was a discussion on the experience of cancer patients, their treatment, and books that deal with cancer. Siddhartha Mukherjee, author, Katherine Russell Rich, a cancer patient and author, and Kavery Nambisan, surgeon and author, participated in this very engaging discussion.

Orhan Pamuk (seated right), in conversation with Chandrahas Choudhary at the Jaipur Literature Festival on January 21, 2011.
James Kelman, winner of the Booker prize in 1994 for his novel “How late it was, how late,” and a resident of Glasgow, Scotland spoke about the need for writers to write in the language other than the standard English used in most Anglo/ American novels and books. It was important to get the right syntax and punctuation to give the correct rhythm of the spoken language.
One of the evening sessions on Bulle Shah with singing of his poetry by Ali Sethi and Madan Gopal Singh in Punjabi was outstanding.
Highlights of the next four days:
The Eye of Memory Annie Griffiths & Karen Chase in conversation with Alka Pande
Helter Skelter Jim Crace, Introduced by Nilanjana Roy
Aisi Hindi Kaisi Hindi Mrinal Pande, Prasoon Joshi, Ravish Kumar & Sudhish Pachauri in conversation with S.Nirupam
Imaginary Homelands: Junot Diaz, Kamila Shamsie & Manjushree Thapa with Chandrahas Choudhury
The Inheritance of Books: Kiran Desai in conversation with Jai Arjun Singh
Boys will be Boys: Ruskin Bond in conversation with Ravi Singh
AfPak: Ahmed Rashid, Atiq Rahimi, Jayanta Prasad, Jon Lee Anderson & Rory Stewart in conversation with William Dalrymple
Readings from Coetzee: J.M.Coetzee Introduced by Patrick French
Marathi Theatre: Mahesh Elkunchwar & Makrand Sathe in conversation with Vaiju Naravane
Half a Yellow Sun: Chimamanda Adichie, Introduced by Jasbir Jain
A Suitable Book: Vikram Seth in Conversation with Somnath Batabyal
A discernible difference at the festival this year is that it has more sponsorships than ever before. Not only events, but the halls are now prefixed with sponsors’ names. So you have The Economist Durbar Hall, Vodafone Front Lawns, Kingfisher Airlines Baithak and Merrill Lynch Mughal Tent.
The evening music events and the bar have been moved to another part of the Diggi Palace grounds separating it from the rest of the venues. This has allowed the organizers to have an additional session at 6 pm while the light and sound checks for the entertainment evenings goes on in parallel at the new Coca Cola sponsored venue.
Every evening, the speakers enjoy the party along with the rest of the audience. On Friday, the evening began with the bagpipers and drums. This was followed by a 16-person orchestra of Been players, drummers and cymbal players. The concluding session of Rajasthani musicians ended like every year in the audience taking to the dance floor and some of them even going onstage to join the folk artistes and dancers. A day spent listening and reading, and an evening of music and dance!