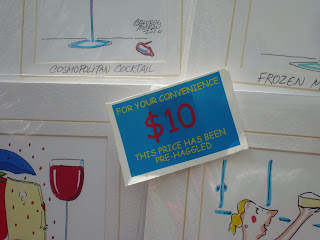 The last time I was there, it was in June 1999. As I looked out of the window of my rented apartment, the lights from the Manhattan skyline could be seen far away in the distance. Yes, this is it I thought. I am in New York.
Twelve years later on 25th June 2010, it was the same feeling. Only this time I was looking out of the window of a hotel room at Newark Penn Station. Its sprawling greyish brown expanse eating up the entire stretch of the road. A clock stood up in the centre of the building. But far away in the distance was the Manhattan skyline again. I wondered why it seemed less brighter than it did
the last time or was it just my imagination. The next day I stepped out early in the morning, map in hand, determined to reach the Newyork Metropolitan Museum by subway. It wasn’t easy. But I decided to behave like a complete newcomer and started with the enquiry counter. Newark Penn Station to 33rd Street on PATH, Crossover from 33rd Street PATH to 34th Street Herald
Square Yellow Line and take the train to 14th Street Union Square. Crossover to Green Line and take the train to 77th Street. It was the easiest thing to do! The trick was to do the reverse in the correct order. But I managed to do even that. At the Union Square station I waited a while to listen to a South American band. They had a decent collection of green notes in the upturned hat kept for the purpose.
At 77th Street as I looked about trying to decide which way to go, I was acousted by a woman with three teenagers – two boys and a girl. From the quiet friendliness of the group, I concluded the woman to be their aunt not mother. They asked me the way to Central Park. I told them I was a visitor like them and trying to find my way to the same destination. A man walked by and they
asked him. “I am a tourist” he said. So map in hand, the teenagers and aunt decided on a way and walked ahead. I went on too after crossing over to the other side of the road. As we approached Central Park, we realised we had found the way and waved to each other across the street. Walking along the park, I reached the Met Museum. Had someone told me I would spend four hours there alone, I would not have believed it. I did spend four hours. But I was never alone. I skipped the Asian and Medieval sections and went on to the American section. The complete sets of furniture from 18th and 19th century America were a treat to watch, especially the tiny chairs with bright yellow tapestry crafted for children.
Among the European painters Picasso was the favourite with everyone and such a great collection spanning an entire lifetime. The Man with the Lollipop was my favourite.At the museum shop I bought five postcards with painting prints. 4 Picasso of which one is a portrait of writer Gertrude Stein and a self-portrait. 1 each of Van Gogh and Monet. The sixth postcard was free. Walking back from the museum I stopped at the artists displaying their works on the street along
Central Park. From a glass sculptor I bought two tiny red beetles and a white and blue turtle to go with it. A cartoonist had his creations titled “Manhattan Cocktails”. None of the artists allowed photography but when I told this one I wanted only his Signboard and would put it up on Facebook and Twitter, he let me take a photo. “This price has already been pre-haggled” it said.
It reminded me of Puneri Patya!

On the way back in the train, a woman stood in the centre of the two rows of seated people facing each other. Her dark glasses made it difficult to see her eyes. She was pregnant and attired in a way that would make it impossible for her to sit. A red t-shirt covered her slim torso and stomach. A pair of denim shorts were slipped on somehow, the front zip fully open gaping at the
swollen stomach. The woman said something about her baby being happy while she stood up. No one was looking at her except probably me. After a while she proclaimed loudly, “I’m sorry all you people. I apologize for my appearance and my clothes. But I’m homeless.” I could only imagine the expression in her eyes. There was complete silence from everyone. After a while, the woman walked away to the other side. Yes, I thought to myself. This is it. This is New York.