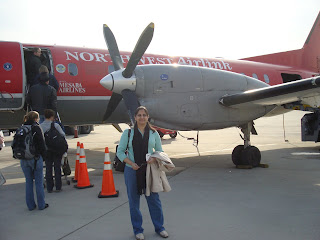 It was in 1977 that I first sat in a small airplane, an Indian Airlines flight from Bombay to Nagpur in an Avro 748 aircraft. I could feel the clouds nudging it from below, or that is what I thought at that time. When it moved from side to side, we would tilt sideways. It was like sitting on a motorbike, only in an enclosed space and high above the ground.
Thirty years later after that first slightly frightful experience in a small airplane, I had a more pleasurable experience. Recently, I sat on commuter aircraft on a Continental Airlines flight – a de Havilland DMC8-200 from Columbus to Cleveland in Ohio. I could see the land below as the white-and-blue plane flew above it. Yep, Ohio is flat. As flat as flat can be. Compared to large aircrafts, we were flying so low that I could say with a little dose of writers’ exaggeration that I could almost read the street signs! What I saw on the ground were toy houses and toy cars followed by rectangular patches of green fields, and brown toy factories emitting thin streaks of grey smoke. Like neat drawings by girls and boys at a drawing class in school. Just before touch-down, I saw from my window the side wheels coming out in a gentle movement like the feet of a ballerina touching the ground.

A memorable flight in a small airplane was the first one that Meryl Streep took on an all yellow de Havilland Gypsy Moth biplane with Robert Redford in the film Out of Africa. “When did you learn to fly” she asks him as she adjusts her head gear while the plane takes off. “Yesterday” he says, startling her. But it is too late to continue that line of conversation as they are already in air. Seconds later, the screen is filled with the sight that they share – herds of zebra, elephants, deer and giraffes running below in uniform parallel rows; a large flock of white birds over a river, opening out their wings in unison like a rush of petals in early spring. Baroness Karen von Blixen played by Streep reaches out to Denys Finch Hatton played by Redford and they hold hands just for a moment. It is the moment that gave me a lump in my throat when I first watched the film with the mixed feeling of happiness they must have shared and the anticipation of tragedy that I feared might follow, as it always does in great films that are beautifully made. They are so much like real life.

Two days after flying into Cleveland, I took a flight to Detroit on Northwest Airlink in an all red plane, a Saab SF340A that felt like a toy plane inside. The flight was more fascinating as we criss-crossed the great lakes. Tiny paper boats sailed below over miniature waves. As we approached Detroit, the airport was visible from a distance, a sight that is not usually possible to see from a larger aircraft. Although there is still a miniscule feeling of danger and risk lurking at the back of my mind when it comes to flying in small aircraft, there is also a reasonable feeling of acceptance of the safety that we take for granted from simply flying often that has created a new craving for flying in small aircraft for the sheer experience of it.