Skip to content
In January last year, the fog decided to play festival pooper and kept some authors from reaching Jaipur in time for the literary mela. What with flight delays and bad roads, those who were to make it for the very first sessions did not reach Jaipur. It took some juggling by the organizers and directors to start the festival on time with careful and swift changes in the program, noticeable only to diehard festival regulars like yours truly who had studied the schedule, marked it with choices and followed it like a project plan.  A very visible black board (or was it a white one?) kept the attendees abreast of the changes in schedules.  Hopefully the fog will behave itself this time.
Now its that time of the year again, soon I will be packing my bag to go and spend five wonderful days at the Jaipur Literature Festival, henceforth referred to as JLF. Let me see what we have in store this time ….
At 10am on the Front Lawns of Diggi Palace will be the keynote address by Sheldon Pollock, professor of Sanskrit and Indian Studies at the . The JLF website provides a longer bio of the esteemed professor. At the same venue an hour later, Orhan Pamuk the Turkish author of , Snow and other books will be in conversation with Chandrahas Choudhary, the avid book reviewer, essayist of literature of The Middle Stage and author of Arzee the dwarf, his first novel. Now here’s the tricky part. At the time of listening to this conversation, there are three other sessions that I will be missing. What are those?
Mathematics and Football: Alex Bellos at the Darbar Hall
Kuch Shehar, Kuch Ped, Kuch Nazmon Ka Khayal: Gulzar and Pavan Varma in The Mughal Tent
Fugitive Histories: Geetha Hariharan and Manju Kapur at The Baithak
For every session I attend, there would be atleast 2 or atmost 3 other sessions going on concurrently at the other halls that I will be missing. Get used to it, I’ve learned to tell myself. That is what life is like isn’t it? You can’t have everything.  Not at the same time anyway.
So what do we have lined up this time at Jaipur?
There are over 200 speakers, a majority of them authors. Others in conversations with them are editors, publishers and academics from literary spheres.
You can find the complete list with bio of all the speakers  on the JLF website.
Authors to make a debut are Amrita Tripathi and Sangeeta Bahadur.  Among the authors  who will be there are Ruskin Bond, Patrick French, Orhan Pamuk, Kiran Desai,  Martin Amis, Amitava Kumar, Rachel Polonsky, Ali Sethi, Tishani Doshi, Annie Griffiths, Kamila Shamsie, Gurcharan Das, Kavery Nambisan, Chitra Banerjee Divakaruni, Chandra Bhan Prasad, Meena Kandaswamy, Bettany Hughes,  Junot Diaz, Basharat Peer, Ahmed Rashid, Chimamanda Ngozi Adichie and many more.
The complete schedule for all the five days is given on the JLF website.
The topics for discussion range from current affairs like Afpak, to importance of books,  to the Crisis of the American fiction.
You can buy as many books as you can pack in your bags from the bookshop or the publishers’ stalls on the grounds.  But attending the sessions is completely free of charge. The kullad-wali chai with a dash of cinnamon or pepper poured out by a turbaned gentleman is also free. 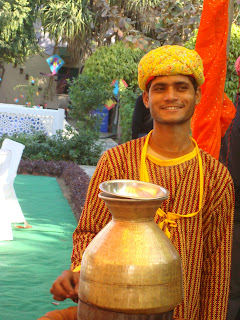 From a recent news report in the Times of India, it seems that J K Rowling will also be there at the festival. I already have requests from a few Harry Potter fans to get her autograph for them. There were rumours in the past too about her attending the festival. Remains to be seen if she really makes it this year.
The news has also reached MuggleNet and fans are ecstatic, even though most of them cannot make it to Jaipur. What a treat for fans who will be at the festival! Are we ready then? 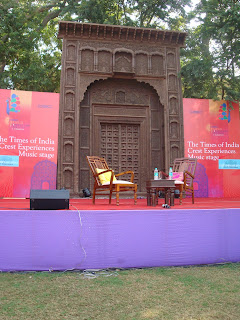